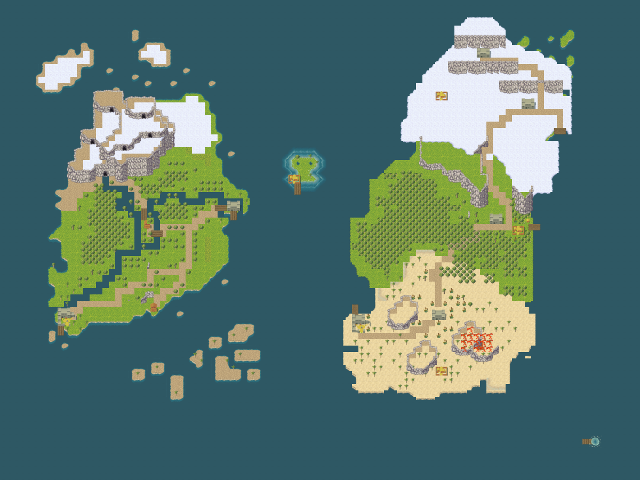 The oldest city of the humans. Their walls are their pride, and the reason why the city still exists.

A devastated mana stone mining town, almost entirely destroyed at war. Suffered heavy damage, and have lots of citizens living in misery. To worsen the situation, the mana stones mines have depleted, and there is no other kind of ore to be found there.

Because it is surrounded by swamps and deserts, and there are lizard monsters living nearby, the city is in constant need of supplies, and is a good place to sell things. However, take care! The arms of law rarely reach there: Only the High Council Officers come to visit, and they are not concerned with petty thieves.

As they say, “you cannot eat money”. Refugees and criminals come to hide in Halinarzo. Many actually have lots of gold, but cannot move to another city.

The first city to accept non-humans, under command of King Wusher. Have lots of wood.

The last human settlement built during the First Era. Difficult to live and the founders were political refugees. Some items are only produced there because the climate.

A city founded by elves and ukars. Very well hidden and protected. Only invited guests are allowed inside. Some of the finest craftsmanship can only be found there.

The location on the world map remains a mistery, it crashed on this world but ship travel have been really difficult lately. However, can be accessed by Jesusalva’s Castle portal.

Where everything happens. The biggest settlement on the world (no joke, it is the biggest map at time of writting).

Greenlands where a building called HEROES HOLD is. Only pro players can survive its challenge.

Deep and dark caves below some volcano. Black Mambas can be found. They say there’s no risk of eruption, but the lava is still there. It is rumored that Volcania is near the caves.

As the name says, it is a secret.

Nobody ever won the duel against the Yetifly, and those who won, cannot tell others about it.

By the way, the Yetifly is still beating Saulc, so he closed the area and said NO ONE can pass until HE BEATS the Yetifly to a pulp!

Fertile region with huge gold mines. Not a single mana stone was ever found there, making that region one of the less monster-crowded areas.

The second biggest city in the world, exotic monsters live there. Many merchants visit there, as the sea travel directly to Esperia is in overall difficult. You can find all sort of products from the whole world there.

A place where only explorers come to visit, and with some nomad settlements.

The Monster King built his fortress in the highest mountain of a mountain range, and rules all monsters from there. Have I already said that he can fly and teleport?

The mountains are so high and harsh that nobody ever reached The Impregnable Fortress, where the Monster King lives. Or so they say.

Fortunately he is more concerned with the people at The Great Continent, who have wronged him.

Loot is to be found there, along certain death.

Various regions and cities in the world.

A small island with perhaps 20 inhabitants. They often trade with Nard.

The town where Tritans live. Underwater. You probably will never get to visit.

A town inside a huge volcano, where the last Redy community lives. We hope it was not destroyed during the Monster War, as only Redys can naturally withstand the heat there.

Not in the real world.

A place full of mysteries, float on the skies. It is on the edge between the Mana Plane Of Existence and the real world.

A region even higher than Aeros, entirely in the Mana Plane Of Existence, where it is possible to depart this world and visit other worlds. The mighty brothers Mana and Plus rules sovereign there.